This 2.1 channel sound bar may look discreet and understated in your living room but with a 320W total output and a powerful wireless sub-woofer, it packs an impressive punch. Dramatic action scenes and favorite music tracks have never sounded bigger.

Get it at the best price in Kenya for Kshs. 22,900 only on Spenny Technologies.

The Sony HT-S350‘s Soundbar main unit is a relatively modest 2.7-by-35.5-by-3.5-inch (HWD) bar, with a black contour featuring touch-sensitive buttons on its faux-leather top panel and a front-facing grille covering the drivers.

The buttons are for power, TV (optical source), Bluetooth source, and volume,

It also has indicators for MultiChannel, TV, or Bluetooth modes.

Also beneath the grille, front-firing drivers deliver the audio, combining with the wireless subwoofer for an output of 320W. The subwoofer measures roughly 15.2 by 15.3 by 7.5 inches, shaped somewhat like a PC tower, and houses a 6.3-inch driver. 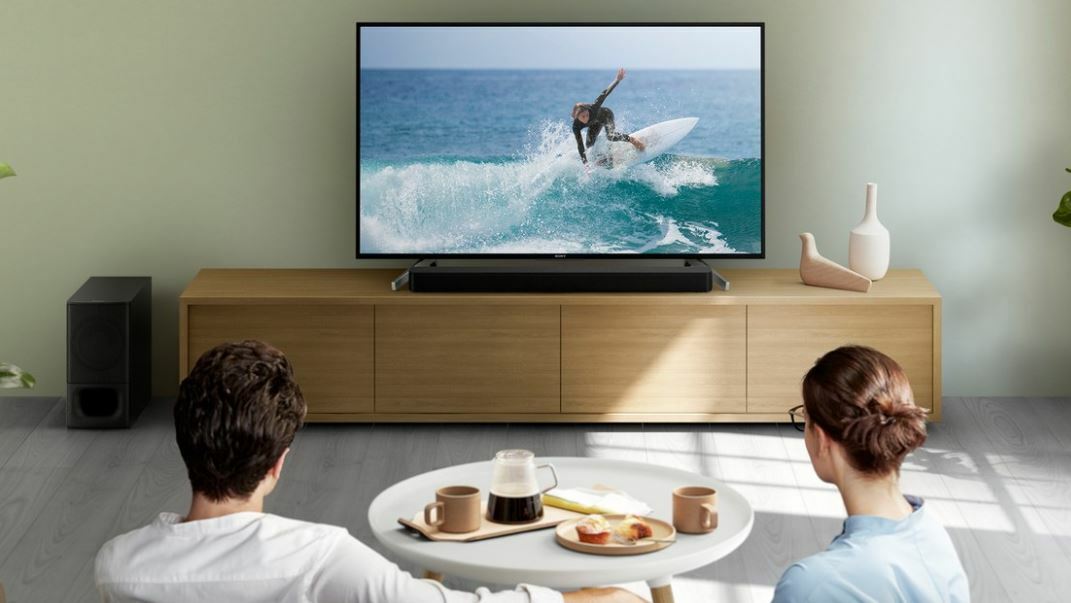 As for connectivity, the HT-S350 has an HDMI (ARC) output and an optical input, with an optical cable included.

The back panel also houses an IR repeater to transmit the remote’s signal to the TV. The soundbar can be mounted to the wall; a mounting guide is included, but no mounting brackets.

You get an oblong, 6.2-inch, black remote, which has buttons along the top section for power, TV and Bluetooth source, and a number of sound modes including Auto, Cinema, Music, Night, and Voice.

The middle section houses a plus/minus volume control, and below that are buttons for the subwoofer volume, mute, audio (which selects the channel for Dolby Digital multiplex broadcast).

Secure Link (for connecting the sub without worries of interference from nearby wireless devices), Indicators (to turn the LED indicators on or off), and modes for Game, News, Sports, and Standard. The remote runs off of two included AAA batteries.

If we described every sound mode the HT-S350 offers in detail, this review would be way too long. As usual, our preference is for the Standard setting, but the various modes—particularly Cinema and Music—also have plenty to offer. And keep in mind, within these modes, you can also tweak the subwoofer levels to taste.

This allows for a wide breadth of sonic possibilities, and you can even dial the subwoofer so far back that it’s barely audible. That extreme is not necessarily useful, but the point is you can take the HT-S350 from relatively light bass to full-on mega-subwoofer mode, with lots of variables in between.

First, we checked out Blade Runner 2049‘s crash scene, during which Ryan Gosling falls from the sky in what looks like a military-grade flying Lamborghini. It features multiple explosions, which through the HT-S350 are capable of serious rumble.

You can really dial it up, or essentially eliminate it, using the subwoofer levels on the remote.

During the Death Star explosion scene in Stars Wars: A New Hope, the HT-S350 delivers excellent depth—you can take things to a seriously rumbly, thunderous place, or dial them back a bit.

Those looking for surround sound-like effects won’t find much of that here—the focus is on clarity, bass depth, and a solid stereo image.

On tracks with intense sub-bass content, like The Knife’s “Silent Shout” and Thom Yorke’s “Twist,” the HT-S350 delivers thunderous lows. The sub can be set to a relatively subtle position.

At mid-levels and in Standard or Music modes, the bass depth is quite powerful and impressive.

Maximum volume levels, the sub doesn’t distort, and it definitely can rattle the walls.

At reasonable levels, you can dial in your desired bass depth, achieving a strong balance between the bright soundbar and the thunderous sub is possible.

Dialing the sub back significantly helps—though you still end up with a sculpted, not-quite-accurate sound signature in Music mode, and something a bit more natural and balanced in Standard mode. It would be nice to have a treble EQ in addition to the subwoofer volume levels.

The subwoofer adds some serious thump to the loop’s sustain, while the sub-bass synth hits also sound powerful here.

For a 2.1 soundbar system at this price, the Sony HT-S350 is a steal. The various audio modes and subwoofer levels allow for plenty of fine-tuning, but things already sound pretty great to begin.